One century of characters, stories, movie, and music:  the current Disney on Ice show at EagleBank Arena (formerly the Patriot Center) at George Mason University pays tribute to some of the most popular Disney characters from the past 100 years. As we mentioned in our original post, Disney On Ice celebrates 100 Years of Magic Presented by Stonyfield YoKids Organic Yogurt takes place October 21-25, 2015, at the Eagle Bank Arena in Fairfax (formerly the Patriot Center). The production features Disney icons, princesses, and more recent characters from Disney and Disney•Pixar films. We attended the opening night show on October 21 and base our review on this performance.

First, the basics: if you’ve attended a Disney on Ice show, before, you know what to expect in a typical production: a little acting and a lot of ice skating and ice dancing, with well-known music you can sing along to. Shows are around two hours long, including a half-hour intermission. 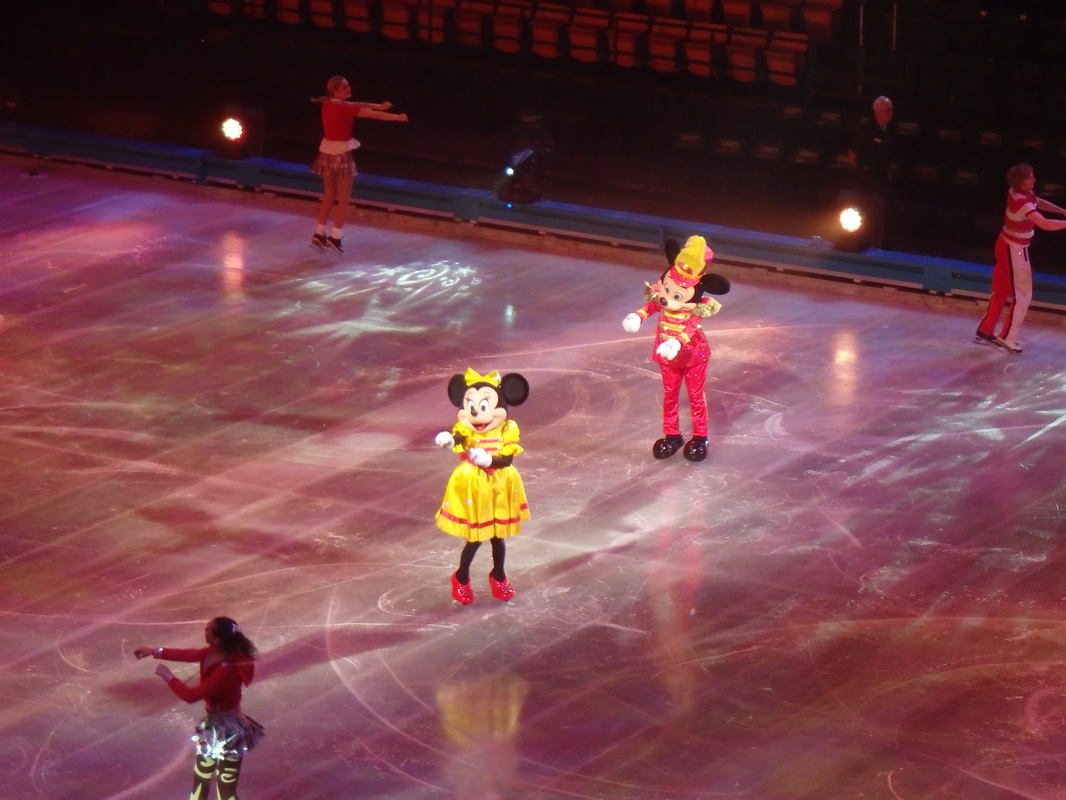 Mickey and Minnie emcee the show

Now, the specifics: the show may be called “100 years of magic,” but the emphasis is more on contemporary Disney characters. Mickey, Minnie, Goofy, and Donald Duck are there to serve as “emcees,” appearing in between the main acts, and the show includes Pinocchio as well. But most of the featured characters are from movies from the past 20 years or so, such as Mulan, Toy Story, Finding Nemo, and of course, the instant-classic Frozen. This is not surprising, given that the preschoolers and young children who make up much of this audience likely know these later characters better.

Not all the stories get “equal time” necessarily: Frozen and Mulan, for example, get more time than Toy Story or Aladdin, or at least it seemed that way. At one point, the Disney princesses (and their partners) – Belle, Mulan, Snow White, and more – were on the ice together, something that seemed to delight most of the little girls in the audience. 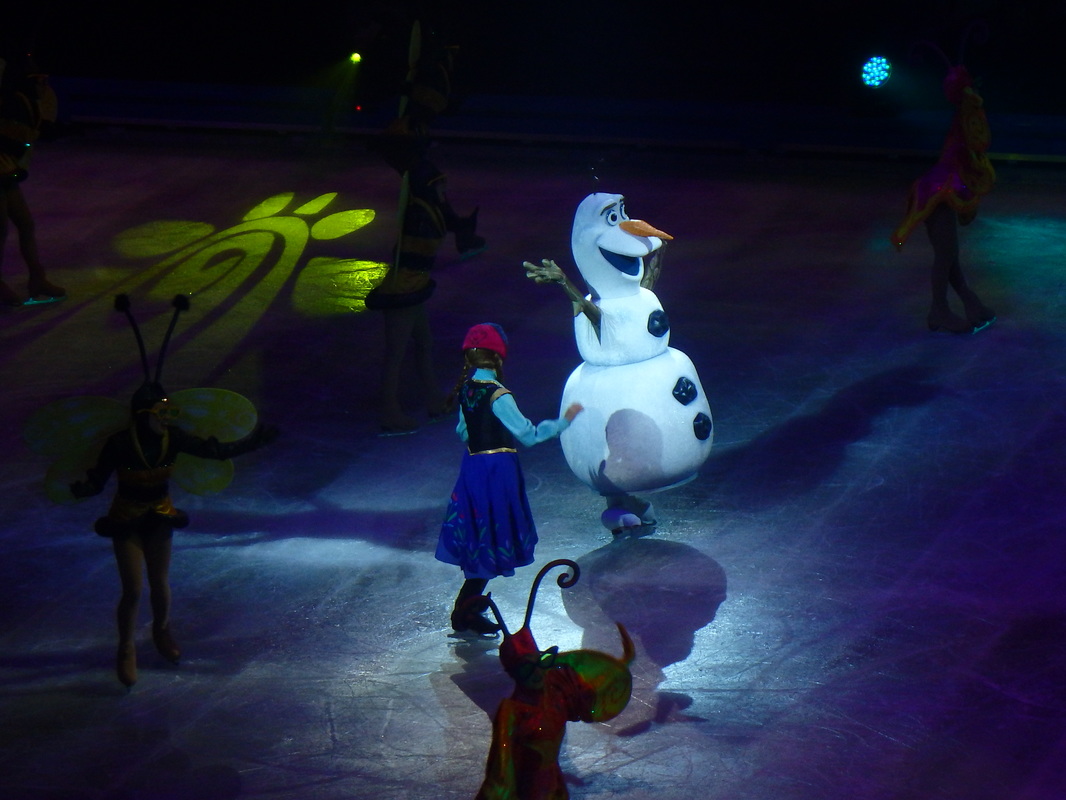 The costumes, as always, are nicely done, something that can’t be too easy, given the challenges of creating a true-to-character look that still lets the ice skaters do their routines. The sets seemed sparser in this production than in other Disney on Ice shows we’ve attended: each story gets enough props to set the right mood and feel, the castle from Beauty and the Beast is cleverly transformed for the Mulan scenes, and the giant turtle during the Finding Nemo segment is a show-stealer. But in general, the special effects seemed more limited.

Don’t expect, for example, to see the same detail here for the Frozen parts as in the full Disney on Ice Presents Frozen show. The falling “snow” and blue lights help to really create a sense of “winter” but you don’t have the elaborate ice castle the full Frozen show had, something that is understandable given the multi-story nature of this production and the quick changes that take place from one story to the next. Along those lines, the storyline weaving all the acts together is very simple:  Donald and Goofy want to make a movie and are taking inspiration from the stories. 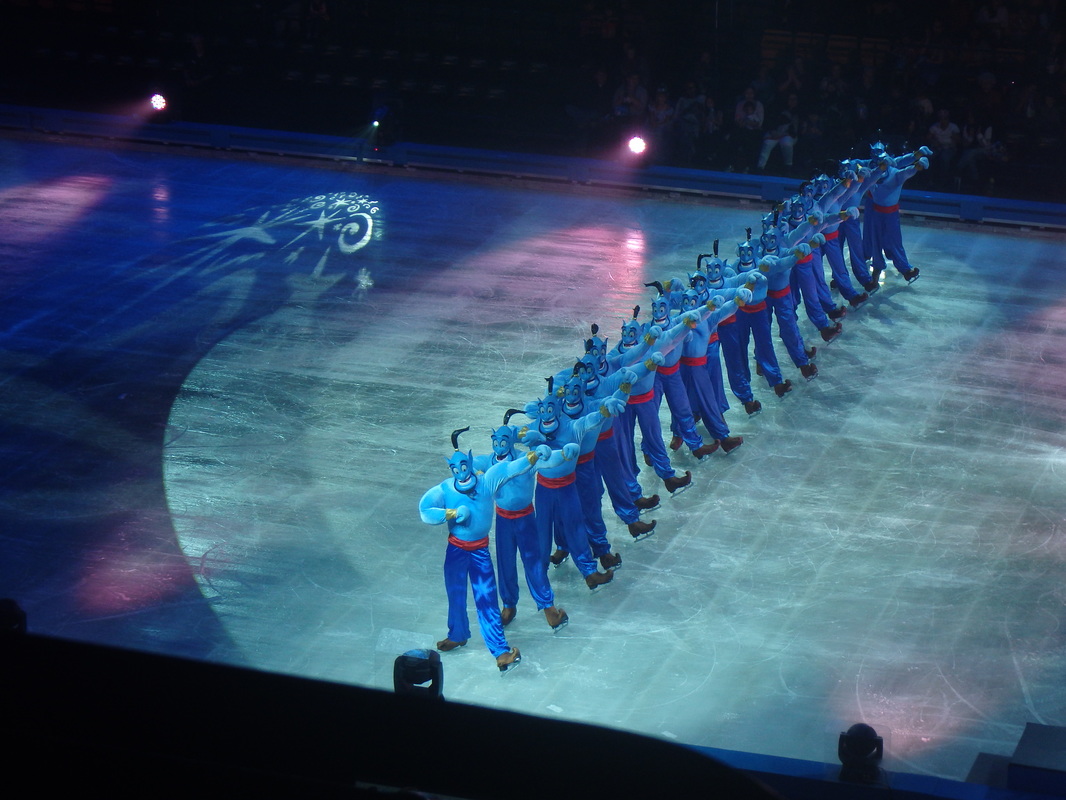 That’s a whole lot of Genies!

Most of the “action” parts take place in the second half. My son, now in third grade, is on the upper age range for these types of shows, I think, and after a mostly cute first half, it seemed like he was starting to lose interest. Then during the second half, with more exciting action scenes from Toy Story, Aladdin, Mulan, and The Lion King, he perked back up. There were fun battle scenes in Mulan, exciting acrobatics during The Lion King, and nice surprises such as a row of Genies in Aladdin (which was bittersweet, as it reminded me of Robin Williams).

Overall, it was an enjoyable evening and a nice way to re-live beloved stories. The show continues through October 25 and tickets start at $20.  Parking at EagleBank Arena is free and easy, and the venue has several food vendors. Show merchandise and memorabilia are plentiful but not cheap, something that is common these days at any live show.

Disclosure: I am a Feld Family Ambassador and in exchange for my time and efforts in attending shows and reporting my own opinion within this blog and letting you know of special offers, Feld Entertainment provides me with complimentary show tickets and invitations to exclusive events. The opinions stated here are purely my own.