The Museum of the American Revolution is a newer addition to the long list of museums in the Philadelphia landscape.  It is just two blocks from Independence Hall and is only about two-and-a-half hours from the Washington, DC, metro area. The building is large with high ceilings and wide hallways, so it can accommodate many people without feeling cramped.

The 118,000-square-foot building has a large collection of art, manuscripts and printed works from the nation’s revolutionary period. Many of the exhibits are interactive, with lots of child-friendly features and multimedia to engage all ages. I thought it was interesting to see how my nine-year-old and twelve-year-old were enthralled by every gallery but by different things within them. 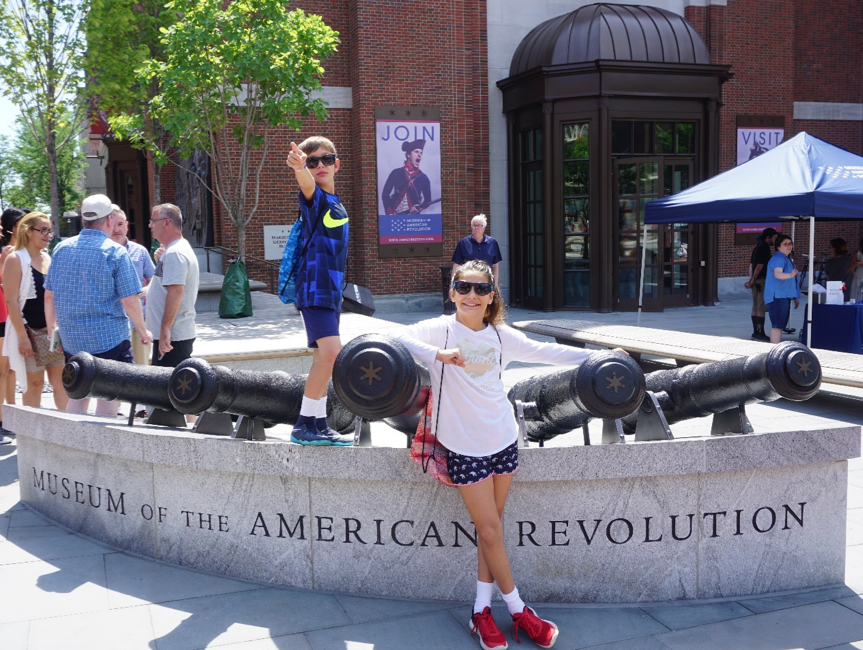 Josephine and Jackson get ready to learn at the Museum of the American Revolution.

The Museum walks you through the birth of our nation, telling many concurrent narratives. Not all colonists were “Sons of Liberty,” for example. Through stories, artifacts, fashion and symbols, the museum tells the story of many people and helps us understand what a difficult and challenging time it was.

I was impressed that the Museum of the American Revolution tells the stories that make up our history from so many different perspectives. There were many colonists loyal to the crown and each colony had its own interests. Jackson, my nine-year-old, was the first to comment that it didn’t seem fair that the colonists refused to pay taxes after England helped protect the colonists from the Indians. We debated this for some time, and as we turned the corner we entered a room full of life-sized Native Americans from different tribes. In the multimedia presentation, you see them debating what to do about all these people on their land. 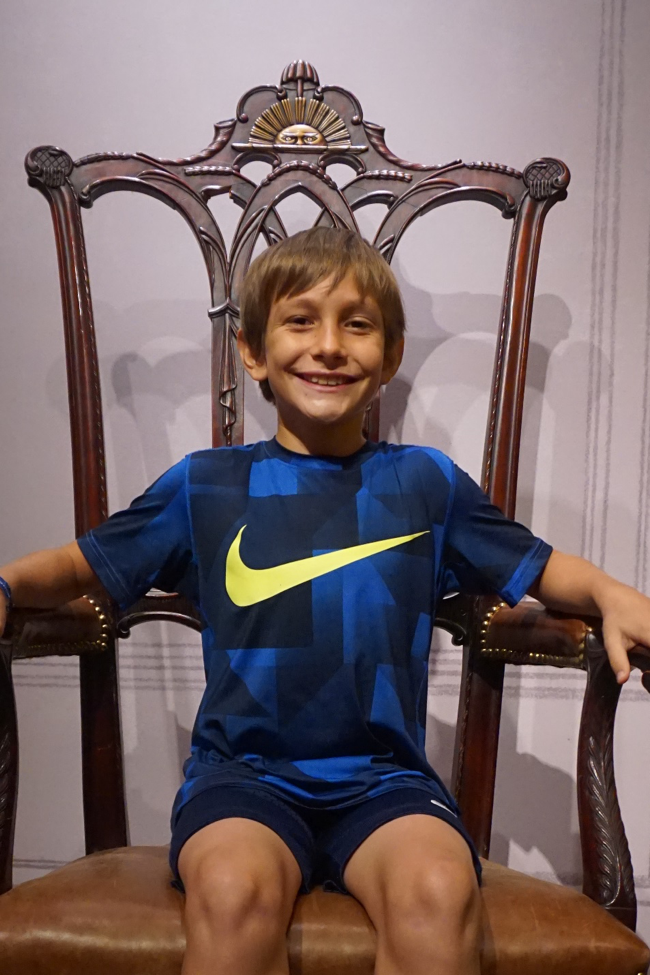 Jackson sitting in a replica of George Washington’s chair featuring the rising sun over his head.

This challenged all of our assumptions by giving us the richness of all the political interests that culminated in our nation’s independence. One of my daughter’s favorite pieces was a marquee featuring George Washington that transforms into the image of King George when you view it from another angle. This piece highlights the fact that not all Americans thought independence from Great Brittan made Americans free. It also introduced the idea that many people feared that Americans would allow President Washington to become a king.  We had a long conversation about the trappings of power and the peaceful transition of power.

All aboard for learning!

One of the other rooms at the Museum of the American Revolution details how the war unfolded at sea, and features an actual ship. This vessel invites you to board the ship for a program which further brings that piece of history alive.  From cannons to piracy to profiteering, the exhibit covers all angles of fighting at sea and therefore provides great education for families.

Josephine on a ship learning about how the cannons operated.

My twelve-year-old daughter, Josephine, found the conflict between colonies and the challenges General Washington faced in keeping our revolutionary army together intriguing. Meanwhile, the weapons and tools that the soldiers carried fascinated my younger son. I think we all left both entertained but also with a deeper appreciation for the complicated time and disparate interests that led to the American Revolution.

One special exhibit that left a real impression was called “Washington’s War Tent.” It is a 12-minute special exhibit that you shouldn’t miss. It told the story of what it was like living in a tent in a military camp.  It also highlighted how General Washington stayed in a tent along with his army and gained their respect and loyalty.  The feature then followed the history of the actual tent and displays the original tent.  It was moving and very well done, and my daughter wanted to stay and see it twice.

On the lower lever, there is an interactive kids’ area which brings the history alive through play.  There are several stations where kids can dress up and “camp” in tents.  Jackson learned how to load a revolutionary gun with a single shot.

Jackson in the kids’ area dressed up as a revolutionary soldier.

It was interesting to see the kids interact through play using what they had learned in the museum. In all, we spent about four hours in this Museum and highly recommend it. You can see more about the exhibits and upcoming events on the Museum of the American Revolution website.

Thank you to Visit Philadelphia for providing tickets to this and other local attractions to facilitate this review. This work is the original writing and opinion of the authors. All photos are by Bret Berlin and family.