Action-packed, superhero movies used to come around only once in a while (at least that was the case when I was growing up), but these days, these blockbusters seem to hit the big screen several times year. Bringing the popular characters of these films to life in a live-action shows is a challenge, but one that Marvel Universe LIVE! has tackled well. This production features the most Marvel characters ever assembled in one production, so fans of the comic book and movie series will find someone (or several someones) to cheer on. The production returns this month to EagleBank Arena in Fairfax, Virginia, with shows March 22-31, 2019, or 11 performances in all. Below is our review from the Opening Night show. 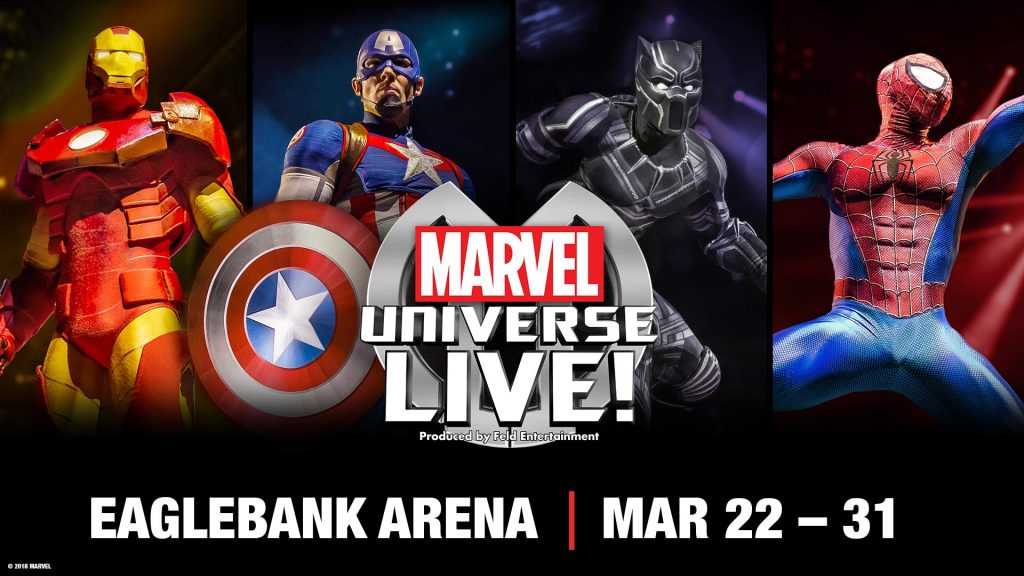 This is an adventure that brings heroes and villains to life with special effects and stunts. Fans will watch a battle to defend the universe from evil:  The Avengers, the Guardians of the Galaxy, and Spider-Man join forces with Doctor Strange, a master of the mystic arts, in a race against time to recover the Wand of Watoomb before it falls into Loki’s hands. Star Lord, Gamora, Rocket, Groot, and Drax make their live show debut. Ion Man, Captain America, Thor, Black Panther, Hulk, Black Widow, Wasp, and Iron Fist also are there, along with other characters. The fast-paced show, which runs a little less than two hours (including an intermission), includes special effects, aerial maneuvers, pyrotechnics, martial arts, motorcycle stunts, and special video projections. Of course a live show has more limitations (especially when it’s in a sports arena) than a slick film production provides, so this cannot compare to a Marvel film. You can’t compare this to a move, so don’t go into it with the same mindset or you may be disappointed. There are some things (especially in todays’ CGI and special-effects world) that you simply cannot do in a live production.

That said, this show packs some nifty tricks, especially with the graphics and videos projected onto the backdrop and the special lighting effects, both of which help transform the scenes and locations without the help of a curtain drop. The change of “locations” and moods is seamless and effective.

The action is non-stop, more so even when compared with some movies. The focus is on what is happening — and what may happen next — and not relationships or subplots. It’s all about battles, races, surprise appearances, and other action. To me it seems that this production was even more action-packed that the show we saw when Marvel Universe LIVE! made its debut in 2014 (Northern Virginia was one of the first locations to welcome this touring show.

This fast pace will work well for most guests — there is never a dull moment, you see your favorite characters all at once, and the time goes by quickly — but it could be overwhelming for some guests. If you are taking very young children (babies or toddlers) keep in mind that the explosions, fire sequences, and other scenes could be scary. The storyline also depends heavily on dialogue, so children who are too young to understand the words being spoken may have a hard time following along. There are also moments when the multiple, simultaneous battle scenes “compete” for your attention, which might be confusing for some guests. A 12-year-old boy in our group (who has no sensory issues and who knows the characters well) said to me at one point “There’s so much going on… where am I supposed to look?” as multiples battles were taking place.  I explained to him that they likely do this so you can follow a specific character of your choosing, or so you can focus on what’s in front of you and no one feels like all the “action” is taking place on the other side of the arena. And that’s another great thing about this show. There is not a bad seat in the house, as no matter where you are, you will see some excited moments right in front of you.