Laissez les bon temps rouler! It’s (almost) Mardi Gras in time! We may be far from the big festivities in Louisiana and Mississippi, but we can still “let the good times roll” right here in Northern Virginia with our own celebrations! Mardi Gras, for “Fat Tuesday,” refers  of course to the carnival season that starts on or after the Christian feasts of the Epiphany and ends on the day before Ash Wednesday.

In some parts of the country, especially along New Orleans and other parts of the south, the Mardi Gras season is a major event with numerous parades, festivals, and galas. And yes, you have ways to celebrate Mardi Gras in Northern Virginia! Our events may not be as big but it’s great we still have these fun celebrations. And if the words “Mardi Gras” strike a bit of panic in you as thoughts of debauchery and non-kid-friendly behavior come to mind, have no fear:  the events below are family-friendly. 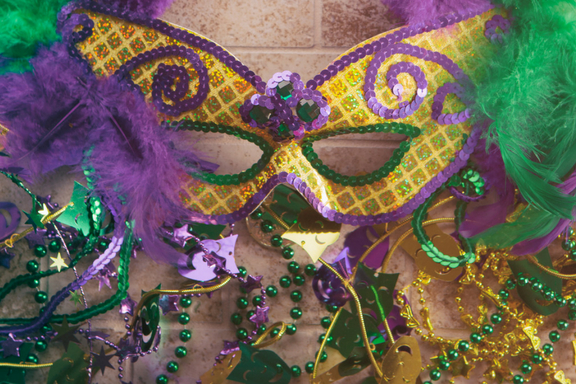 Mardi Gras Parade and Celebration
Saturday, March 2, 2019
The newest Mardi Gras celebration in the area is hosted by The Wharf, the  Let the good times roll at this recently expanded waterfront complex in Washington, DC. At this event, which made its debut in 2018, catch some beads, dance in the streets, feast on festive food, and toast to Fat Tuesday! The New Orleans-inspired parade takes place along Wharf Street, with a dance party at District Pier, and a fireworks finale that will light up the night in purple, green, and gold. The fun takes place from 6 pm to 8 pm.

Clarendon-Courthouse Mardi Gras Parade
TBA
The annual Clarendon-Courthouse Mardi Gras Parade has everything you’d expect: floats, bands, beads, decorated vehicles, marchers, dancers, and even dogs and horses. This event takes place on typically Fat Tuesday each year, starting at 7 pm at Wilson Blvd and N. Barton Street, and continues along Wilson Boulevard past Liberty Tavern, ending on N. Irving Street. Organizers have been putting on this event for nearly 20 years and it’s the largest of its kind in Northern Virginia, but no plans have been announced for 2019

… and further out, but worth the drive:

Culpepper Carnival
Saturday, March 2, 2019
Another fun celebration, albeit a bit further out (about an hour away) is the Mardi Gras celebration in downtown Culpeper, Virginia. Culpepper Carnival is an all-day festival with fun for the entire family including live music, performing artists, wagon rides, New Orleans-inspired food, face-painting, crafts, balloon-magic, mask making, and  in-store specials.