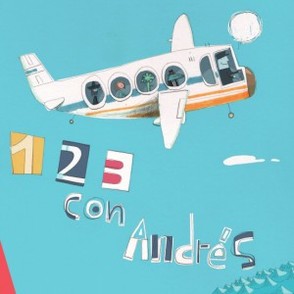 We are super-happy for, and incredibly proud of, Andrés Salguero, known to many of you (and especially your kids) as “Uno, Dos, Trés con Andrés.”  The local children’s musician has released his first album, a fun and friendly bilingual romp through multiple genres, and the CD release party is just in time for Cinco de Mayo!

Colombian-born Salguero stands out from the crowd as a fully bilingual performer whose music serves as a cultural ambassador of sorts. His self-titled CD is a great introduction to Latin music from Central America, South, America, and the Caribbean — in a family-friendly style. You can enjoy salsa, bolero, plena, mariachi, and other genres through songs about friendship, everyday life, and music itself.

I will have a full review for you soon, but for now I’ll just say this is a truly enjoyable CD and I’ve been playing my preview copy quite often! Right now I want to tell you about his fantastic show coming up Saturday, May 3 (10:30 am), at the Old Town Theater in Alexandria — and to give you a chance to win tickets and your own copy of the CD!

Andrés, who has been touring around the country for the past few weeks, is making his CD release party right here at one one fantastic FIESTA!  His May 3 concert is just two days before Cinco de Mayo — a holiday celebrating the Mexican army’s victory over the French at the Battle of Puebla — so Andrés is honoring Mexican culture in a special way. His show will feature a very special version of If I Had a Mariachi, featuring dancers from Los Quetzales Mexican Dance Ensemble, a Northern Virginia Mexican folkloric dance group.

Andrés will perform other songs with a full band featuring a line-up of highly talented musicians he introduces on his site.  Tickets are $8 each and you can buy them at the theater or by calling 703-549-1045. 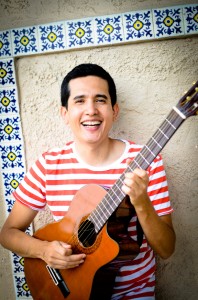 One more thing Andrés:  he is an incredibly nice and charming person. We met him about a year ago and right away he made us feel like we were old friends.  Humble and unassuming, you wouldn’t know he has a doctorate degree in music (from the University of Missouri, per his bio) or that he’s been doing this for decades. Somehow calling him “Dr. Salguero” would seem a bit odd… after all, to many kids and adults, he’s just “Andrés,” a grown-up whose baby face makes it seem like it wasn’t so long ago that he was a kid himself.

Accomplished as he is academically and musically, it’s that youthful and joyful outlook that makes him connect with audiences and what a lot of what makes this CD so engaging. So, get ready to bailar y gozar and disfrutar on May 3!

Oh, and about that giveaway:  enter below for your chance to win four tickets to the show and the copy of the “1, 2, 3 con Andrés” CD!  The winner will be selected Wednesday morning, April 30, and notified right away, so be sure to list an email you check very frequently!